The Internal Revenue Service has paid more than $2.8 million in bonuses to employees with recent disciplinary problems

(Copyright ©2014 by The Associated Press. All Rights Reserved.)

WASHINGTON — The Internal Revenue Service has paid more than $2.8 million in bonuses to employees with recent disciplinary problems, including $1 million to workers who owed back taxes, a government investigator said Tuesday.

More than 2,800 workers got bonuses despite facing a disciplinary action in the previous year, including 1,150 who owed back taxes, said a report by J. Russell George, the Treasury inspector general for tax administration. The bonuses were awarded from October 2010 through December 2012.
George’s report said the bonus program doesn’t violate federal regulations, but it’s inconsistent with the IRS mission to enforce tax laws.

“These awards are designed to recognize and reward IRS employees for a job well done, and that is appropriate, because the IRS should encourage good performance,” George said. “However, while not prohibited, providing awards to employees who have been disciplined for failing to pay federal taxes appears to create a conflict with the IRS’s charge of ensuring the integrity of the system of tax administration.”

Other examples of misconduct by workers getting bonuses included misusing government credit cards for travel, drug use, violent threats and fraudulently claiming unemployment benefits.
The IRS said it has developed a new policy linking conduct and performance bonuses for executives and senior level employees.

“Even without a formal policy in place over the past four years, the IRS has not issued awards to any executives that were subject to a disciplinary action,” the IRS said in a statement. “We are also considering a similar policy for the entire IRS workforce, which would be subject to negotiations with the National Treasury Employees Union.”

There are no government-wide policies on providing bonuses to employees with conduct issues, the report said. However, a 1998 law calls for removing IRS employees who are found to have intentionally committed certain acts of misconduct, including willful failure to pay federal taxes.
Tax compliance at the IRS is generally better than at other federal agencies.
In 2011, 3.2 percent of federal workers owed back taxes, according to IRS statistics. The Treasury Department, which includes the IRS, had the lowest delinquency rate, at 1.1 percent.

The delinquency rate for the general public was 8.2 percent.

(Copyright ©2014 by The Associated Press. All Rights Reserved.)

Joe is a client who can speak on the above topic and more.: 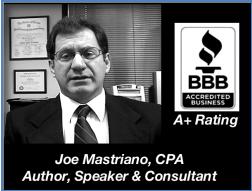